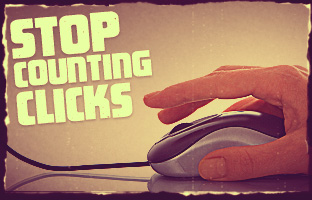 Maybe it’s time to forget all that 3-click-rule nonsense.

The 3-click-rule is the Freddy Kreuger of web design advice. You think it’s finally dead and then it comes back and starts slashing up sensible debate about usable design. I’m hoping to convince you to stop talking about the 3-click rule. I don’t mean substituting it with the 4-click rule or the 5-click rule. You should stop counting clicks as a measure of usability altogether.

The 3-click rule states that no page on your website should be more than three clicks away from any other page. The idea being that you’ll easily get to what you’re looking for because nothing is very far away. In the days when we were all on dial-up internet connections, there was a certain amount of sense to it.

At the time, the web was fairly new and there were very few conventions or best practices available to help us build good sites. So the 3-click rule exploded. Everyone who looked after or designed websites knew about it.

As the web grew in importance, so did usability. The flaws in the 3-click rule became fairly obvious to those of us who were observing the user experience. In many cases, it was attempts to adhere to this rule that introduced problems. Eventually somebody tested the rule itself.

In 2003, Joshua Porter of User Interface Engineering wrote an article that should have killed the 3-click rule for good. He found that the number of clicks affects neither task completion nor user satisfaction. Porter says in his article:

“…the Three-Click Rule does not focus on the real problem. The number of clicks isn’t what is important to users, but whether or not they’re successful at finding what they’re seeking.”

I probably e-mail this article more often than any other usability article on the internet. As important and insightful as the article is, that’s not why I send it so often. I do so because I’m always talking to people who are fretting over the number of clicks on their website.

Once the 3-click rule had been disproved, you might expect click counting to fall out of fashion. But alas it hasn’t. It has been over 5 years since Porter wrote his article, but number of clicks keeps coming back as a measure of usability.

If you haven’t noticed this yourself, just ask a usability professional. Our clients are still finding it hard to accept recommendations that add more clicks. I fear the phrase ‘but that’s an extra click’ may follow me around forever.

It’s time for a cycling analogy

I’m a keen cyclist and there are quite a few hills near where I live. On a gradual hill, I shift into a fairly easy gear that still allows me to maintain a bit of speed. In order to get up the hill I might turn my pedals 300 times. Each pedal turn takes a bit of effort, but the hill isn’t very steep so I have no real problems getting up it.

The next hill I come to might be a lot steeper. In order to get up it I’m going to need to shift into my easiest gear. Each pedal turn is very easy, but I need to turn the pedals a lot more often in order to get up the hill. The steep hill is a more difficult task than the gradual one. By breaking the task up into lots of easy pedal turns I can still get to the top without problem.

So what has any of that got to do with websites? Well, in order to keep some tasks simple for your users, they may have to click more often. In the same way that a cyclist needs to perform more pedal strokes when climbing a steep hill.

Not all clicks are the same

Say I’m going on holiday and need a travel insurance quote. I go to the homepage of my current bank and have the choice between Personal banking and Business banking on the main menu:

Those four clicks take very little effort, they are easy clicks. I’m happy with the process because each decision is simple. I might not have such an easy time on a competitor’s website.

Let’s say the web team of the competitor site is trying to reduce the number of clicks that users need to take.

Most of the products are available on the homepage. I’m a single click away from starting the quote process for travel insurance. But there’s too much to look at and I can’t see the link I need. By the time I find it, I’ve spent a long time scanning the page. On this site, I have a bad experience, despite being only a single click from what I needed.

This is not to say that adding extra clicks improves the user experience. It just means that some clicks are easy and others are more difficult. Removing 1 click from a 4-click user journey does not necessarily make it easier. You could just be making the other 3 clicks more difficult.

In his article, Porter explained that the 3-click rule was “well-intentioned but misguided”. I would add that the pursuit of the 3-click Utopia, and any click counting for that matter, can be a harmful distraction. Instead of improving the user experience, it can do the opposite.

The difference between my 2 examples for travel insurance was nothing to do with the number of clicks it took me to get to the page I need. It was because one site kept my choices simple and the other didn’t.

When Steve Krug says “Don’t make me think”, this is what he’s talking about. If his book had been titled “Make me think as hard as you like, but no more than 3 times” it might not have sold as well.

David Hamill is a freelance usability consultant based in Edinburgh, UK. He helps organizations, both big and small, to improve their websites. David blogs about Good Usability and is on Twitter as @dav_hamill.