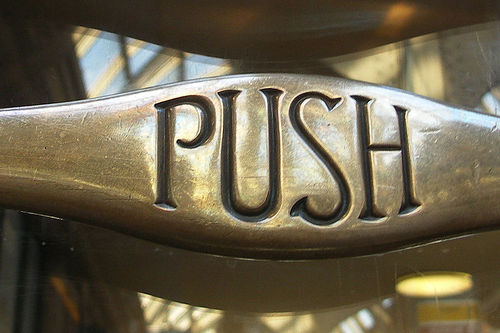 We’ve all been there. You are striding confidently along, your legs propelling you at a decent pace as you continue your journey of the day. Barely pausing, you confidently reach out to push open a door that leads you to the next chapter in your book of the day when… smack. It’s not a push door. It’s a pull door. There is no sign to indicate this and now you’ve broken the illusion that you are a suave and sophisticated individual. You curse the high heavens and wonder aloud why the door chose to thwart you, and why there are so many different ways to open a door now that there is no standard.

This is the big question. Why so many options? Well, the answer to that is quite simply… evolution. Over centuries, doors and their locking mechanisms have evolved and changed with different purposes. Now that people are thinking about usability, people are also thinking about how to better things like doors. Sadly, it takes a while for the rest of the world to catch up, so whereas we are starting to see new standards, it may take a while for them to be implemented in an across the board fashion. 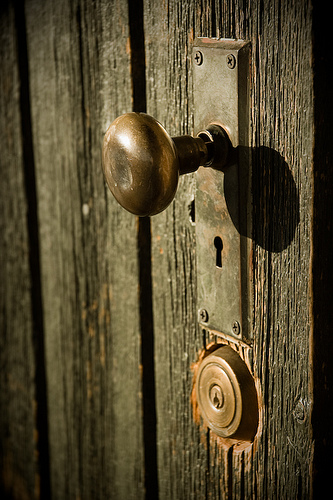 Evolution of Door Knobs and Handles

In the beginning, there were merely doors. They started without locking mechanisms, being merely push, pull, fold or slide open. Often there would be a handle fixed to one side with which someone could tug open the door, but even that was another step on the evolutionary scale. If these locked at all, they would generally be locked or secured with a simple latch.

Turning doorknobs, which operate on a spindle, are a way to keep doors securely closed. They operate by grasping them and turning them to pull back a bolt which secures the door as closed. Then, they become a regular tool for pushing and pulling a door open or closed. 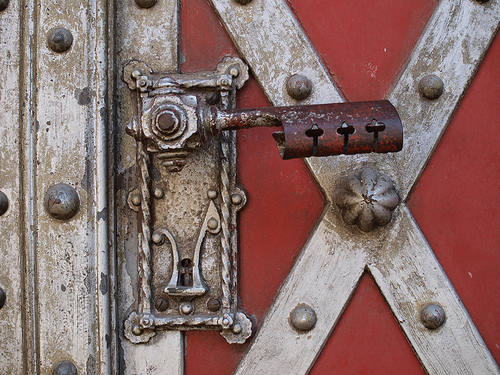 Lever handles are a step along from turning door knows. The issue with turning door knobs is that if you do not have the ability to grasp something firmly, they can be hard to operate. Levers, however, merely require a little force or weight on them instead of the dexterity required for a turning action. As such, it is easier for people who may be a little weaker or less dexterous to operate a level handle. These are becoming much more standard.

Automatic doors usually require motion in front of them to open. This detaches the user from any kind of physical interaction with the door in any way. Your size and strength ceases to matter.
The catch here, though, is that these doors rely on power and sensors, both of which can fail. They are not universally functional and they take energy to power beyond the energy of the person operating them. They are not environmentally friendly and they are vulnerable to malfunction. They are merely much more convenient.

The interaction that we have with doors has altered over time. Now, very little effort is required to operate a door, whereas before, they were much more rudimentary.

The next issue is when simple things like doors require operating instructions. Instead of having doors open in either direction, most doors are a one way trip… either push or pull. Because we as humans are used to expending as little effort as possible, it is often the case that we choose to push a door. Pay attention to it next time you aren’t sure how a door opens. Most of the time you will likely push first. So when a door is a Pull door, we anticipate that it will be labeled as such so that we do not have to waste our time finding things out.
This is another example of the evolution of the usability of a door…. they now have operating instructions.

Over time this item with a simple use has grown to be something that can give people difficulty or ease of use, expend or absorb energy in it’s operation, and make grown men blush with shame. The usability of a door has developed as we have developed in ability and technology.

So what is the next step in the evolution of the door? Have we finally reached capacity? Is this as good as it’s going to get? What do you think?