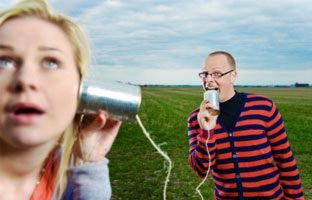 Content will only take you so far if you don’t listen to what your users are trying to say.

While you’ve probably heard the saying, “Content is King,” the sites that reign supreme in today’s Web world don’t just produce great content, they create a culture of passionate participants and a community of conversation. It’s like BoingBoing author and editor Cory Doctorow said, “Conversation is king. Content is just something to talk about.”

The broadcast and communications media of the twentieth century, the age of radio and television, phone and eGoldFax secure fax, are giving way to the conversation media of the twenty-first century, the age of Digg and YouTube, Facebook and Google. This is a profound paradigm shift towards the cooperative creation of content by an entire community, a shared endeavor that makes every participant both creator and consumer. No longer is content created and distributed by a small group of professionals, and no longer are conversations held between a single sender and a single recipient.

There are a number of flavors of the new media. For social networking sites like Facebook, content just gives users something to talk about. Sites like Wikipedia use conversation as a means to generate an entire encyclopedia’s worth of collaborative content. Sites like Digg create communities where the quality of content is determined solely by the amount of conversation it generates, where recommendations and discussion – not the whims of the editor – are the difference between forgettable and front page news.

The sites that are best able to harness the power of conversation media will help to shape the next generation of web media. All it takes is to create a community that rewards participation and encourages users not only to consume, but to start contributing as well.

While content-driven sites can often benefit from conversation, you can’t just add a comment form at the bottom of each page and call it a day. A community is built around active, eager participants. Your site has to give them a reason to get involved. This means understanding your users and creating an attractive, compelling community. Users participate for a number of reasons. Here are some of the big ones:

These three examples share a common theme. The YouTubers that post the best videos, the Diggers that share the most interesting stories and the community members that provide the most assistance are all rewarded by the recognition of their peers. Peer recognition is the most powerful incentive to contribute to a community and to engage in conversation, and creating a culture where members are recognized for their participation will help ensure a lively conversation and an active community.

There is one site that best exemplifies the new breed of conversation media. This site does not generate content and provides few features, yet it is one of the fastest growing sites in history and has entered like no other into the everyday language of modern life. I’m speaking, of course, of Twitter. Twitter’s profound effect on online conversation is, at first, hard to explain. Text messaging beat them to the character limit and blogging beat them to personal broadcasting. No, the secret to Twitter’s success is that by lowering the transaction cost and making conversations both ubiquitous and personal, Twitter enables communication on a scale never before seen, and that has been truly groundbreaking.

This kind of complex, many-to-many conversation has the potential to create large, vibrant networks of like-minded members. The size of the community is limited only by the incentives it provides its members to participate in conversation. Sites that create a culture of conversation break down the barriers of traditional broadcast and communications media, turning consumers into contributors and a group of users into a community.